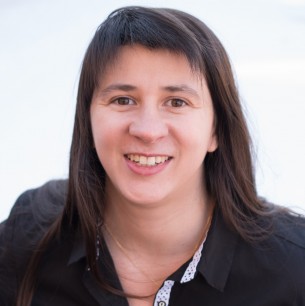 Roxane Coche, Ph.D. is an Assistant Professor in the Department of Telecommunication at the University of Florida. She also serves as Associate Director of Sports Journalism and Communication. Coche studies the impact of gender and race on sports coverage. The interview took place in July. It was edited for length and style.

Tell us about yourself.

I was born and raised in France. I was only 12 when I decided that I would be a sports journalist. And that is what I did. When I was 12, I sat down with my parents to talk about what I wanted to do in sports, because I realized that I could not be a soccer player.

There was no professional women’s soccer at the time, and definitely not in France. Soccer in France was kind of like American football here. So, my parents made a list of what I could do in sports and I settled on sports journalism. I went to journalism school in France. I worked in the industry for about three years as a sports reporter and producer.

I really wanted to come to the U.S., so I looked at Ph.D. programs and I got intrigued. I ended up doing my Ph.D. in the Hussman School of Journalism and Media over at the University of North Carolina in Chapel Hill. I taught while I was in my Ph.D. and realized I loved it. So I ended up staying in academia.

My research has to do with sports, as you can imagine, and trying to find solutions to the inequity in sports, especially gender issues.

Tell us about your research and your work.
Growing up, my dream was to be a soccer player. Young girls should be allowed to try out for a dream. When I got into my Ph.D. program and learned about communication research, I realized I had to know more about the field before I could actually help find a solution. You cannot find a solution to anything if you have not defined the problem first. I started doing content analyses of media coverage around women’s sports. I delved into what happens to female sports reporters.

Tell us what you found.

Obviously, one of the major findings that you always see is that women’s sports are basically not covered. For my dissertation, I found that on the top two sports news websites in France, the UK, Canada and the U.S. in 2012, women’s sports coverage was less than five percent.

And that was an Olympic year. During the Olympics, it was obvious that women actually were receiving more coverage. If I had collected the data for my dissertation in 2013, instead of 2012, it probably would have been even worse.

There are also issues in the quality of the coverage. Some broadcast studies show that the quality of the production is lower for women’s sports coverage than for men’s sports coverage. I am actually doing a study about this right now with my doctoral student. We are looking at how the National Women’s Soccer League (NWSL) and the Major League Soccer (MLS) are being produced by CBS and ESPN, respectively. We are going to be looking at the differences between the two.

Why is it that women’s sport is covered so much less than men’s?

There are market reasons for sure, but there are also historical reasons. Women were banned from playing sports in a lot of ways. Sometimes socially and sometimes it was an actual legal ban. During the First World War, women started playing soccer to entertain people who were not fighting. Because so many men were fighting, some women working at factories started soccer leagues to entertain people. After the war ended, those women leagues were so popular that, when the men came back and the men’s leagues started again, the women’s leagues tended to be more popular. That was not very appreciated by the Football Association, which is the federation in England. They straight out banned women from playing.

There were a bunch of nations that ended up following in that path. France never had a straight-out ban, but the federation completely stopped supporting women’s soccer. A lot of countries did that. What happened between 1921 and 1971 was that a whole global market for men’s soccer was created. By the time the 1970s came around, women had been banned for 50 years.

Why are women’s sports covered so much less?

Well, what is usually advanced as the reason is because women’s sports do not bring money. But the MLS has lost money pretty much every year since 1994. You still see people investing in it. The NBA sometimes loses money. Broadcasters are willing to bet on men’s sports because it is a proven product, but that is because they had a chance to prove themselves. The NBA, the NFL, the NHL all lost money for several decades before becoming solvent, but men kept investing in it.

We need investors to do the same for women’s sports, especially considering the growth potential for the product. Los Angeles is going to have a new women’s soccer team and the investors are famous women: Serena Williams and her daughter, Natalie Portman, Jennifer Garner and other names. They say they are going to actually invest the time and the money. Women’s sports have never had that. Not from the broadcasters. Not from the investors.
Tell us about your project for the Consortium.

If you put that into the context of the lack of coverage of women’s sports, then what chance do female reporters have?

That got me intrigued. From everything I could find, that is the only study that looks at this. One study is not enough to establish proof of anything. So my idea is to dig a little bit. That study was also done using written text. I want to do something similar but using video packages.

I think I am going to find similar differences. Ideally, I would like to do more than just black and white, because race is not just black and white. Based on that previous study, I genuinely think that an Asian-American reporter might be perceived as less trustworthy or less credible than an African-American reporter when it comes to certain sports because there aren’t that many Asian-American athletes in the major American sports.

What do you think this will tell us about trust in media?

That is a very good question. It is likely further evidence that the cards are stacked against certain populations, at least in terms of being successful in a journalistic role. There is also the idea of who will be taking the survey. Will women find women more trustworthy than men? Will African Americans find African-American reporters more trustworthy than people of other races will? That will have to be taken into consideration as well.

Oh, yes. It restricts them a whole lot. As I said, the whole idea for me is to figure out how to identify issues and try to find solutions. It is a really slow process. We are really starting to understand why the market is the way it is. But we are going to have to look to find solutions.

I love that UF is looking at artificial intelligence. Most of the Associated Press stories that have to do with quarterly reports from companies are written by artificial intelligence. What if we can get people to invest in AI reports for women’s sports? Would that help further the idea that women’s sports should be covered? Could that be the start of a solution? I believe that, if we use it wisely and correctly, technology can help fix some of these issues.