Jay Hmielowski’s research shows trust in media, scientists and information is heavily influenced by the news we consume—and that’s tough to change.

Jay Hmielowski, Ph.D., has driven across the country many times and one thing he sees on every trip sticks out: the ubiquitous satellite dishes on household rooftops throughout rural America.

As an assistant professor in the Department of Public Relations at the University of Florida, Hmielowski does a great deal of research on how Americans consume media, how they react to messaging and how all of that impacts trust in information. In those satellite dishes, he sees insight into America’s media diet.

“That communication that you’re getting from your cable feed or your dish feed plays an important role in leading you to trust certain sources or believe certain pieces of information over others,” he said.

Hmielowski’s research has yielded a number of insights on the impact of media usage, as well as a deeper understanding of how Americans trust information. Central to that understanding is that trust today may rely more upon values than it does on credibility.

For example, it is well documented that President Donald Trump sometimes did not tell the truth. The president made more than 20,000 false statements as of mid-July, according to The Washington Post, which created a database of his inaccuracies. That being the case, how can people continue to trust the president?

“It’s a values thing,” Hmielowski said. “Even if they give bad information, like Donald Trump does over and over and over again, it’s not going to change trust in them because it’s not about giving quality information. It’s about, ‘does the person align with my values—then I’m willing to trust them.’”

Hmielowski, who works with the university’s Consortium on Trust in Media and Technology, has done many studies showing that the media Americans consume has an impact on partisanship, trust and where they stand on issues.

How much people trust scientists and believe in global warming eventually impacts policy positions, such as support for or opposition to carbon taxes or U.S. membership in the Paris Climate Agreement, which mitigates greenhouse gas emissions. 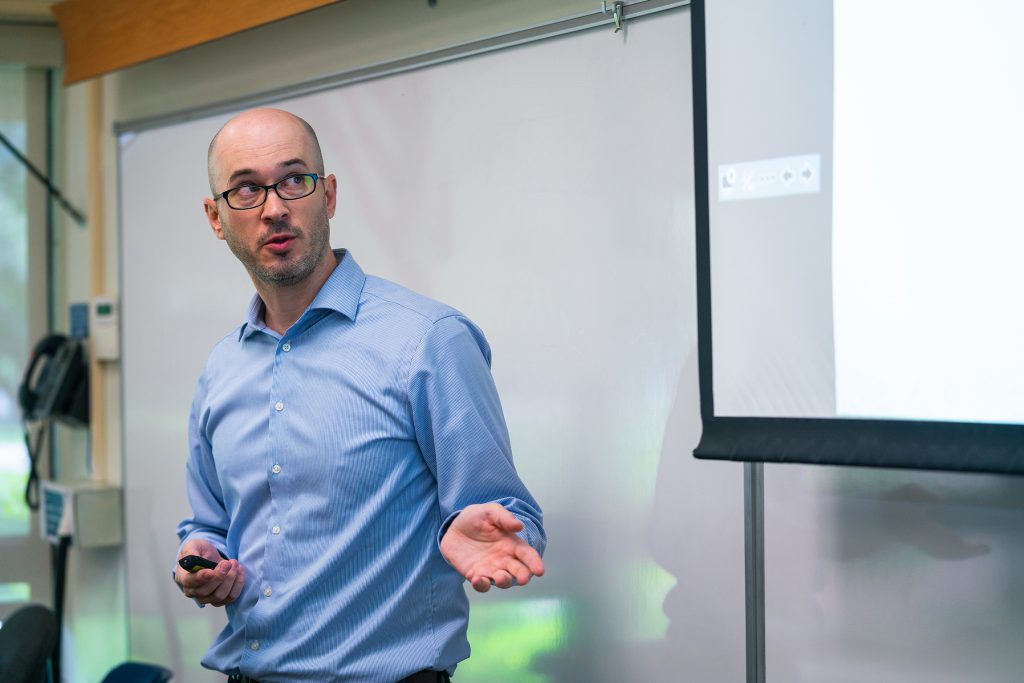 A lot of the stuff I do is trying to figure out why we have such divergent views,” Hmielowski said. “How do you have Republicans thinking that climate change isn’t happening, while Democrats think it is happening? Part of it is the communication that you are engaged with, whether it’s online, face-to-face or media stuff.”

Indeed, there is a relationship between all of those communications, specifically the conversations people have and the trust they put in media sources.

For example, one study that Hmielowski was involved in showed that talking to people who support their views increases trust in outlets such as MSNBC among liberals. As one might expect, hearing opposing views leads conservatives to hold negative views about liberal news outlets.

That effect can be pronounced in less-diverse parts of the country where people are unlikely to come in contact with opposing viewpoints. In short, those satellite television dishes have an impact.

As Hmielowski put it, “the only contact they have with certain groups of people is through Fox News.”