A professor of language and communication looks at media messages on politics and policy and how language impacts trust. 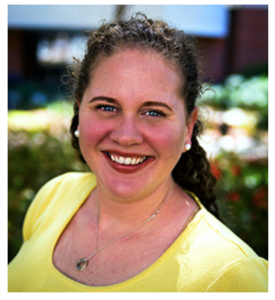 When Emily Rine Butler, Ph.D.,  hears two people talking, she registers far more than words themselves. She might note body posturing and gesture. Or she might observe how someone sequences their actions to align themselves with someone in interaction. She may also pay attention to pauses, which are a serious indicator of engagement for someone with a trained ear.

Butler is an applied linguist—more specifically a conversation analyst—who works at the Dial Center for Written & Oral Communication and in the Department of Linguistics at the University of Florida. She sees and hears the world differently, applying linguistic insight to real-world problems.

When Butler looks at media communication around politics and policy, she sees much that could be done to increase trust in media.

“What makes somebody credible? Why do I believe you? How do you construct expertise in anything that you do?” she asks. “It’s not only the facts that matter. If somebody fundamentally doesn’t believe you, then it doesn’t matter what you tell them.”

One major solution for news outlets, she says, is focusing on connection.

“You have one job in public speaking, and your job is to connect with a human being,” she said. “You need to make sure they feel fundamentally seen. People have a very good meter for whether you’re talking at me or you’re talking to me. And so, I think the media needs to do a better job of making people feel seen. You don’t have to agree with them, but you do need to connect with them.”

As she put it, “in order to rebuild trust, you need to rebuild connection.”

The Power of Metaphor

Butler, who works with the university’s Consortium on Trust in Media and Technology, said part of rebuilding that connection is to really pay attention to how an audience understands the world through their language choices.

Citing the work of George Lakoff, a linguist and philosopher who has written more than 15 books, Butler says that metaphors are particularly important.

“Our worldviews and our reality are shaped by the metaphors that we use every day,” she said. “They’re so ingrained in us culturally, that we don’t even notice that we were using them.” For example, we no longer question conceptual metaphors like “argument is war” in which we “advance our position” or “shoot down someone’s point.”

One good example comes from the recession in 2008 and whether to talk about the economy as a “body” or as a “machine” as a means to convince the public to support increased regulations on Wall Street.

“A body is self-governing. It can self-regulate,” Butler said. “If you talk about it in this way, it would stand that you’d want a much more hands-off approach, because the body can self-regulate. However, if you use metaphors associated with the economy as a machine, if you think of it as a car, cars need tune-ups. In order to run best we need to regulate them. Those who favor this idea say the economy needs government regulation.”

By framing an issue conceptually, it can help people draw on a host of related imagery and ideas that exist in everyday life, which in turn shapes how they continue to think about the issue in the future.

Building on metaphor, word choices themselves are consequential. Butler points to language surrounding abortion rights. Opponents call themselves pro-life, implying that supporters are pro-death. But rather than be forced into that position, supporters set up their own dichotomy, calling themselves pro-choice, positioning the other side as against freedom of choice.

The media has mirrored these terms and, in some cases, moved past them by simply referring to those who support or oppose abortion rights. That language avoids labeling altogether.

Language choices can also be destructive. Butler points to the movement to “defund the police” that gained attention in this year’s protests over racial injustice. The phrase means different things to different people, but it is generally used to describe efforts to adjust police department priorities and budgets to allow social workers and mental health professionals to work alongside officers.

By calling on American cities to defund the police, Butler says, it allowed opponents to paint the effort as one to remove the police from communities altogether. A general public understanding of the word “defund” doesn’t change just because it was used in a very specific way by activists in their communities. “Words have histories,” she said. “Basically, progressives took an idea and just handed it to the other side by not considering broader language use.”

Whether media uses that term will impact the future of the issue. “I think media has a duty to think about the language choices they make,” Butler said. “Language choices shape the story.”

“When you can establish a connection, they’re more likely to listen to what you’re saying,” she said. “And if they feel like you appreciate where they’re coming from, they are more likely to believe you.”