COVID-19 made 2020 a mixed year for scientists. Rarely in contemporary society have men and women in science been so revered as America awaited the creation of a vaccine in record time. And rarely have they come under such withering attack, as the pandemic response got pulled into election-year politics.

Jamie Loizzo, Ph.D., an assistant professor in the Department of Agricultural Education and Communication at the University of Florida, wants to find out why that happens.

Loizzo is working with the university’s Consortium on Trust in Media and Technology on research that will explain why and how scientists who engage in public communication are publicly targeted for their efforts.

“If a scientist is going to communicate with the public, the conversation has to go both ways,” Loizzo said. “The public needs to trust them, and they need to be able to trust the public and feel safe enough to share their science.”

Loizzo’s research comes amid a national debate over where Americans should get information on how to prevent the spread of COVID-19: from politicians or from scientists. Many of the nation’s top scientific voices, such as Dr. Anthony Fauci, director of the National Institute of Allergy and Infectious Diseases, have endured criticism for recommending measures such as social distancing and face masks.

| Click here to read a Q&A with Jamie Loizzo. |

Loizzo’s work will focus on social media, where many scientists feel the most pressure. Specifically, she will study the Twitter audience of key scientists in order to understand more about those who criticize scientists for sharing their work. 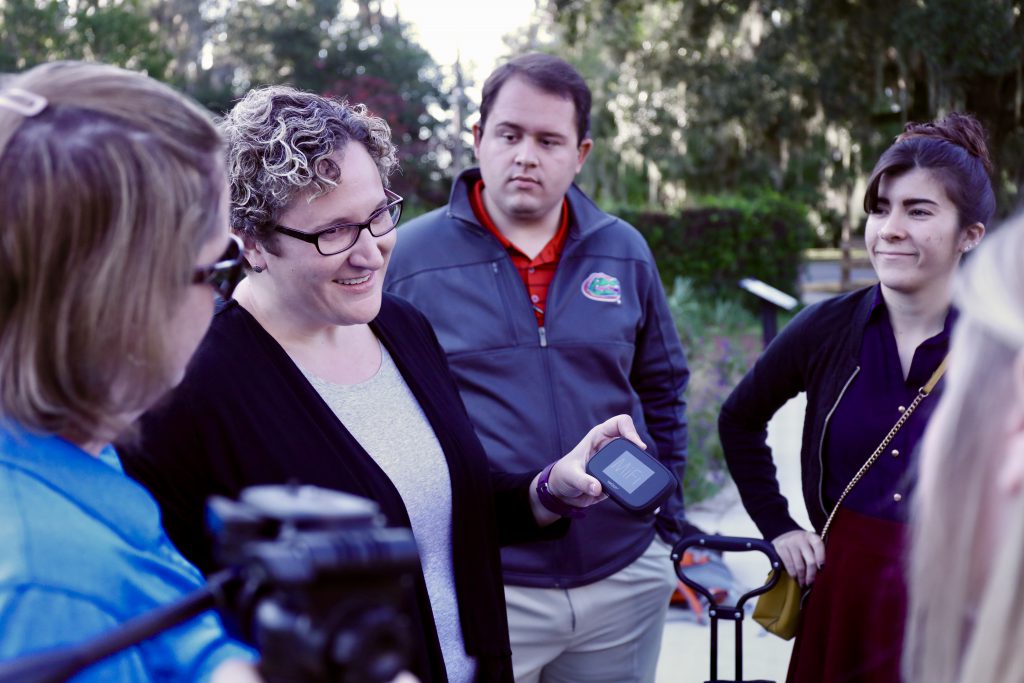 To do this, Loizzo and her colleagues are modifying an open-source software called Botometer, which uses machine learning to separate bots from humans within an audience of followers. The goal is to use the software to gain insight into those who attack scientists on social platforms.

“We will comb through all that data and determine different characteristics and profiles of people who target scientists,” Loizzo said. “We’ll see what that tells us about what types of things people trust on Twitter and what they do not trust.”

Loizzo’s research will start with Dr. Kevin Folta, a professor in the university’s Horticultural Sciences Department, who frequently communicates with the public about science. Folta is founder and host of the Talking Biotech podcast and has almost 25,000 followers on Twitter. He has also been repeatedly targeted—even threatened—by groups and individuals who disagree with his views and conclusions.

Loizzo said that’s not uncommon for scientists with large followings. “If you have fewer than 1,000 followers on Twitter in the science community, you are sort of talking to yourself and your fellow scientists,” she said. “If you do the work to attract more than 1,000 followers, then you are singing from the rooftops, and you might actually have the ability to influence companies, policy and lawmakers.”

Harsh criticism often awaits those who build such large audiences. “Pick your issue,” Loizzo said. “Biotechnology. Vaccination. Climate change. Water quality. We have scientists working in all of these areas that, as research shows, are able to have more than 1,000 followers on Twitter. They are more likely to get a variety of responses.”

The Impact on Trust

The question that poses is obvious: Will it have a chilling effect on scientists? Put another way, why would any scholar take the time to communicate directly with the public if criticism and threats are a substantial part of the response?

Loizzo says it cuts to the issue of trust. “How do we trust scientific conversation and engagement?” she said. “How do we establish a safe and trusting space where everyone feels like their opinions and their values are trusted? We need to trust the science of the issue and not just react with emotionally charged viewpoints.”

Loizzo says that is true not only for high-profile voices like Fauci, but for scientists everywhere who want to communicate about their work.

“It is still important for us to investigate communication and trust at that level,” she said, “because there are a lot of people who follow false accounts or who create fake accounts to troll scientists and politicians, alike —they can influence our virtual and physical safety.”