How we construct our media diet can have an impact on polarization.

Myiah Hutchens, Ph.D., is an assistant professor in the Department of Public Relations at the University of Florida. She also works with the Consortium on Trust in Media and Technology. Her research focuses on how communication functions in democratic processes, particularly what leads people to seek out diverse perspectives—views they disagree with—and how individuals process that disagreement. The interview has been edited for length and style.

Let’s start at the start. Tell us a little bit about yourself.

Sure. I just finished my second year at the University of Florida, so I’m going into my third year here. I grew up in Washington State. I did my undergrad and masters at Washington State University and fell in love with the research process. At the end of my undergrad, I was a PR student and we had to do a campaigns course where you actually did real research for a client. I thought that was the most fun thing ever. I even talked to my professor and said, “Hey, how do I do this? How do I get a job just doing these components?” She said, “Well, Myiah, that is what professors do.”

Politics is something that I have always enjoyed. It was something growing up that we talked about in our house. When I decided to go get a Ph.D., I started looking at what scholars were doing with political communication that I liked, that was similar to my interests. I became a deliberative democratic scholar. That underlies what I do, the idea being that I think democracy is good; I think democracy is fostered through conversation with others, through interacting with other people; and I think that it is good to disagree, and through that we make better political decisions. I rolled all of that into the research that I do now.

I am really doing what I initially started doing in my Ph.D., figuring out how we can make democracy better through interactions with others, particularly interactions with people who are different from ourselves. Is it through our discussions, or talking to people who are not like ourselves? Or using media sources that we would consider counter-attitudinal? We know that theoretically counter-attitudinal interaction tends to have good democratic outcomes. Does that then actually happen — do people process counter-attitudinal information in a way that would be useful? That has been the type of work that I have been doing.

Go a little deeper into that. You are looking at people who are seeking out media sources you call “counter-attitudinal.” Explain that to us.

Sure. That would be like this: I am a Democrat, but I turn on Fox News, or I read The Hill, or I am going to look at Breitbart, or something that is going to be seen as “not my people.” I’m listening to something that would provide me with an alternative perspective. When that happens, what do I do with that information?

Is that information going to make me more tolerant? Am I going to have a better understanding of why people think the way they do, even though it is not the way that I think? That is the nice big theoretical picture.

While that is a really nice theoretical picture, what we see in practice is not working as well as we would like it to. A lot of times, if I am a Democrat and I go watch Fox News, what I am actually doing is I am counter arguing. I am arguing with them, or I am using it as a way to inoculate myself against their arguments, rather than becoming more tolerant. 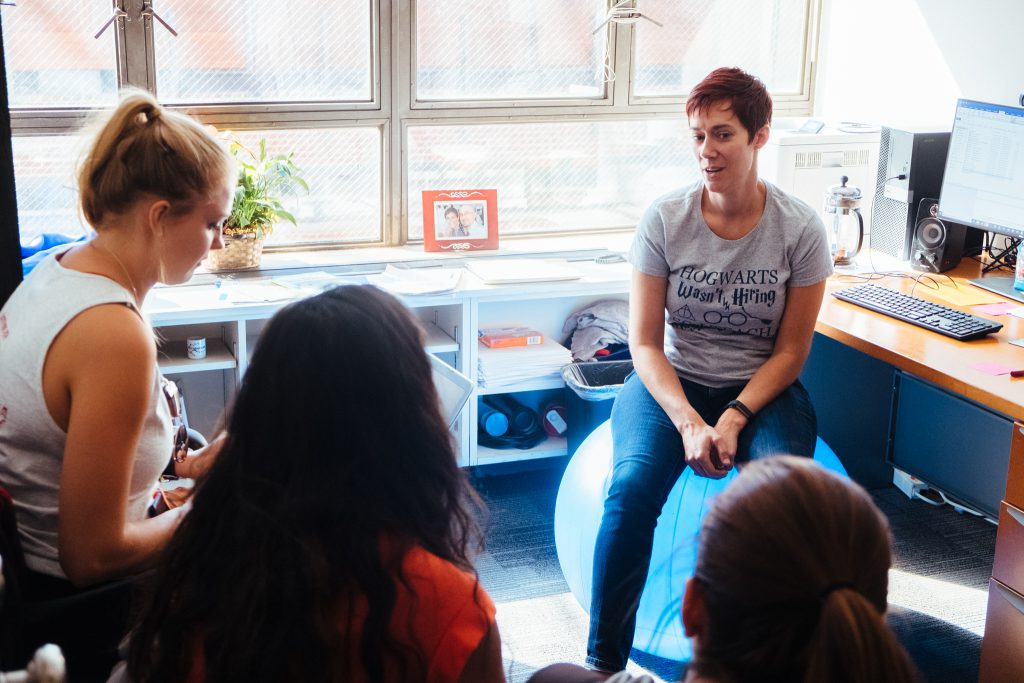 So people tend to become more polarized rather than less when they expose themselves to alternative media sources that run counter to their beliefs?

Right. My research focuses on who they are talking to. Some work we have done in online contexts actually does find that it can reduce polarization a little bit, specifically in social media settings. So the idea that somebody is on Facebook or Twitter, in comparison to somebody who is not on Facebook or Twitter, those people tend to be more polarized than people who are offline. In aggregate, just by being on social media makes you a more polarized individual. But the more time you spend on Facebook actually decreases your polarization because you have more exposure to counter-attitudinal information.

There are differences between our face-to-face discussions and our online interaction, and I think that is important. When you are thinking about communication or thinking about information, there are differences between these sources that matter. It is not just, “I learned this fact.” Where you learned that fact is going to matter. Was it from your friend? Was it from a social media site? Was it from your favorite newspaper? Those different communication sources will impact you differently.

Can you go deeper into that? What has your research shown?

Yes. A lot of those differences tie back into the trust conversation. We have different expectations for different media sources, and so our trust in these different media sources matters. If I am talking to my friend about politics, I have this interpersonal relationship with them. Typically, if I am talking to you, I trust you, I think you are knowledgeable. That information coming from you means something more because of this relationship that I have with you. In this close type relationship where I trust you, I pay attention to you.

In social media, you actually get a little bit of that interpersonal trust carry over, because if I am connected to you on social media, I have some sort of relationship with you. People use social media differently. Some people have thousands of friends, and they have never really interacted with those people. But for most of us, we have some actual relationships with people. If I see somebody posting something, posting a news story, a meme or something that is giving new information, I am not necessarily thinking about it as that media source. If you posted a New York Times story, I am not thinking about it as, “this is The New York Times.” I am thinking about it as, “this is my friend who posted.”

Going back to the Democrat who is watching Fox News, they are very much aware that it is Fox News and that it is a counter-attitudinal source. And so their defenses are higher in that case, they are going to respond to that information a little bit differently. We know that people process ads differently than other information, because they know it is an ad and they are going to be sort of skeptical because it is an ad. If it is from my influencer friend on Instagram, I might process that information differently.

So, if people spend enough time on social media, that can actually make them less polarized?

Let’s talk about the current media climate. More people are getting news through social channels than they were 10 years ago. What do you think that means for the current political climate heading into an election?

The biggest issue, the elephant in the room that everyone is trying to deal with when it comes to information sources right now, is the prevalence of misinformation. Misinformation has always existed. But social media is a little bit different in that it allows that information to be spread much more quickly than before. Different organizations are trying to do things about this. Facebook continues to go back and forth about where they are going to stand on misinformation. Twitter has been trying to deal with that a little bit more strongly. That is something that I think is going to matter.

What does all of this say about the consumer and where they are going to head for their sources of information?

TV is still the 10,000-pound gorilla in the room. This idea that we need to just focus on what social media is doing is problematic because we should not forget that there are still a lot of people watching network news. There are a lot of people who are tuning into Fox News and MSNBC and CNN. Those matter consistently in every single data set that I have ever collected. What we are watching on our TV still accounts for a much bigger portion of the average person’s media diet than social media. So yes, there is some evidence that people are really trying to find their niche. There are concerns about filter bubbles and the echo chamber. And we can do that so much more easily in the fractured media environment that we have, especially the social media environment. But most people are not doing just that. Most people still have interpersonal contacts that are going to give them something else. Most people still are spending more time on TV—maybe more time now on partisan TV.

Tell us what else you are working on.

Sure. One of the things that I am really interested in, that I think is important, is how we talk to other people. Taking that in an online context, when comment sections first were created, we were really excited about them, right? We thought this is going to be great, this is how people can discuss and have this fabulous debate. Instead, we have problems with incivility and non-productive discussions. Something that I have been working with for the past couple of years now is, what are things that we can do in that environment to improve discussion.

Anonymity decreases the civility of discussion, especially for older individuals. Making rules does not actually influence it as much as we would like. We have done different experiments where you are being rewarded or punished for what you are doing and that does not matter as much. The most important thing that I’ve found is what your ingroup says. If there’s a rule saying don’t be a jerk it doesn’t matter, but if your ingroup tells you to stop being a jerk, but that actually has a bigger impact—your ingroup challenging you matters. The outgroup does not do anything.

In the last couple of experiments I’ve run, we were looking more at the content of the comment and how that influences what the individual thinks about the story, what they think about each other, what they think about talking about politics in general. How does that actually impact whether or not you trust media in general, whether or not you trust the story that you read. Does that conversation that is happening in the comments section actually negatively impact how you think media works in general?

I looked at this using a story about immigration, which was something that is a little political but the specific topic wasn’t hugely polarized. When people were talking negatively about the story afterwards, that actually impacted media trust. Not only does it impact what you think about that story and whether or not you think that story is good, but it actually lowers your trust in media overall. Essentially negative comments are bad for the media. It made people feel more anxiety after they read a story that had negative comments. And so, the interpersonal interaction that we are having around news stories matters for media more generally.

Did you find anything that mitigates that?