Should our data be considered property? Jasmine McNealy says maybe not.

The U.N. High Commissioner for Refugees works in 135 countries to help the world’s 26 million displaced people. As part of that effort, the organization collects biometric data such as fingerprints, retina scans and facial recognition to help document those who have lost their identification papers.

Like TSA tests in the airport, Apple phones that use facial recognition and Amazon’s new hand-scanning payment process, it’s an example of how people worldwide are increasingly ceding biometric data to organizations that ask for it. It’s a practice that raises important questions.

“What happens when this data is used against them?” said Jasmine McNealy, Ph.D., an associate professor in the Department of Telecommunication at the University of Florida and a lawyer. “What happens when someone uses your system for a purpose other than the good purpose you intend? This is very dangerous—and invasive. It has the possibility to harm people.”

McNealy studies the law and policy that governs how data is used in the United States and abroad. In a world in which social media platforms, companies, schools, hospitals and other organizations routinely collect terabytes of data on everyday people, she argues that it is time to examine how data collection and use is regulated.

“All of these organizations … are involved in collecting data and they don’t always have a rationale,” she said. “They don’t have holistic ways of dealing with that data. They don’t have solid ideas about why they need all that data, or any idea about the possible implications.”

| Click here to read a Q&A with Jasmine McNealy. |

McNealy, who works with the Consortium on Trust in Media and Technology, says Americans need laws and regulations that protect individuals while allowing companies to adjust their models and continue operating. Such a system could increase trust in government, companies and other institutions that has been eroding for years.

“We need to question how we think about data, change our relationship to it, and rethink what organizations need to function,” she said.

Millions of organizations collect data on U.S. citizens every day, from our likes and dislikes on social media and our online purchases to our attendance at work or school and our income. Often, that collection takes place without people knowing.

One relatively benign example is school attendance. When a teacher calls the roll, few would think of it as data collection. Yet most schools have detailed attendance files on their students—data that could help or hurt these students in the academic world.

A more complicated example is social media, where likes, dislikes, reading habits, interests, purchases and more are tracked. While it has long been understood that people trade access to their data in exchange for free access to powerful platforms, McNealy questions whether the average American really understands that bargain.

“I do not think people willingly trade it,” she said. “People are just trying to participate in the way that they can. It is not necessarily that people want to trade their data for connection, for community, for socializing. It is just that, this is a system that has not been regulated like it should.” 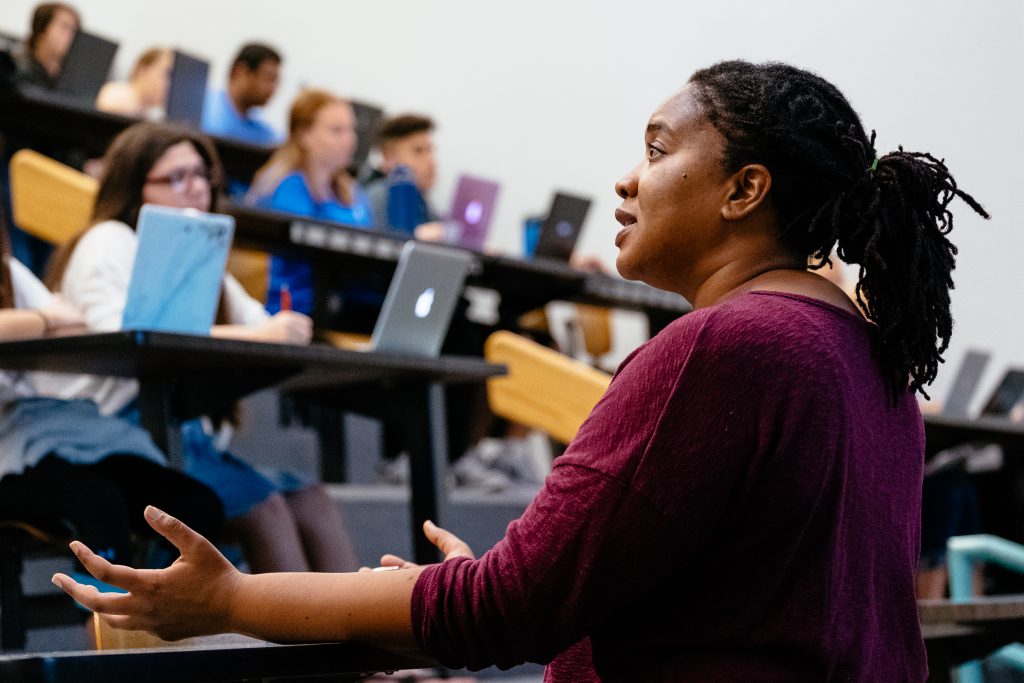 Of course, there can be serious implications when data is misused, and McNealy says the impact can often fall disproportionately on minority communities, poor Americans, women and older people. As she put it, “people who are neglected, who are excluded or who are not thought about.”

She uses data-driven law enforcement systems as an example. “We know that our criminal justice system in the United States has a racism problem,” McNealy said. “If we have this huge data set, what is it going to say? It is biased data. It is data that is corrupted. If you train a system on that corrupt data, what kind of outcome do you think that it is going to have? Usually, it is going to be a biased system.”

The answer, McNealy said, is a proper set of laws and an advanced regulatory framework that protects citizens from abuse even, as is often the case, if that abuse is unintentional.

To create such a system, however, requires answering complicated questions, including how we think about data and the

“People would like to think of data as property,” McNealy said. “I would say that is a really bad idea. One of the reasons is that property can be taken away from you. You can lose your property.”

By way of example, she points to a documentary called “Mucho Mucho Amor,” which details the life of Walter Mercado, a famous television astrologist in Latin America. Mercado disappeared from the public eye for an extended period because he lost the rights to his name, his image and other representations, unknowingly signing them over to a company owned by his manager. The situation resulted in a lengthy court battle, and made it impossible for him to appear.

“This is the kind of thing I am talking about,” McNealy said. “You can lose the right to yourself, or how you are represented.”

McNealy said that protections can be put in place if Congress and other federal regulators create modern data laws and a solid regulatory framework. It takes political will, she said.

“We are talking about humans,” McNealy said. “Humans deserve a higher level of care. They are not some abstract idea.”